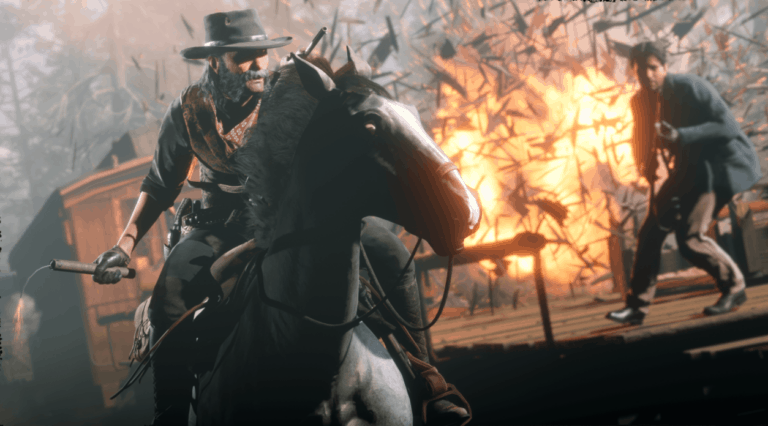 Red Dead Online: Blood Money, the major summer DLC we’ve been hearing so much about and also anticipating for a while, has gone live. Players can now jump into a new world of crime and ill-gotten wealth without any kind of upfront investment.

Blood Money introduces us to the Saint Denis mob, a highly organized criminal business looking for new muscle. Guido Martelli, direct subordinate of the big boss Angelo Bronte, is seeking any outlaws with a quick trigger finger and flexible morals to undertake Crimes and Opportunities, as the new activities are known in-game.

To avoid the scrutiny of the law, the criminal element of the Wild West has implemented their own form of currency in order to conduct illegal business in peace – this commodity exists as bonds known as Capitale. Martelli is hell bent on re-acquiring most of the Capitale in circulation for the mob to solidify their position as the underworld power in the region, and that’s where you come in.

Players won’t need to buy-in unlike in the case of Roles which provided the bulk of post-launch content thus far, so no matter how new you are on the frontier, you’re welcome to dive into the world of Crimes. These are a wide variety of activities and missions of different difficulty you can undertake to acquire Capitale.

Bumbling out into the wilderness is hardly an efficient way to track down clandestine tender, so Martelli has set you up with his contacts of career criminals – including some returning faces from the Red Dead Redemption 2 story mode. Anthony Foreman is a gang leader, James Langton is an infamous bounty hunter, Sean Macguire is a thief temporarily removed from his gang and the mysterious Joe has his connections with the seediest of folk.

While there are various small scale Crimes waiting for the solitary and inexperienced players of Red Dead Online, a trio of complex, multi-part Crime Contracts are also here to challenge higher rank players. These wild-west analogues for the heists of GTA Online each have their own storylines beyond being among the most lucrative activities in the game. The three added as parts of Blood Money are The Railroad Contract, The Jeb Phelps Contract, and The Bluewater Contract, with more on the way in future DLC.

As you amass more and more Capitale for your good friend Martelli, your standing with the Bronte mob will increase. Trusted friends of the organization will be clued into Opportunities missions, which present a new approach to storytelling in Red Dead Online. Martelli is determined to undermine the rise of a problematic senator from Lemoyne who has been causing trouble for the mob by stealing three precious jewels.

Three of these Opportunities missions are available to be unlocked with Capitale as of the release of Blood Money, with an additional two joining in later on to round off the story. We imagine further Opportunities will follow, but they’ll have a different plotline. Rockstar will be revealing more information about upcoming Opportunities and Crime Contracts in the coming weeks.

The release of Blood Money also heralds the introduction of the Quick Draw Club, the reworked successor of the Outlaw Pass offering shorter, snappier reward tracks. The Quick Draw Club No. 1 is already live, with 25 reward ranks. It’ll cost you 25 Gold Bars to buy in, but you’ll earn them all back alongside exclusive items and other bonuses by completing the challenges. 4 of these passes have been announced so far, and players who buy in to all 4 will get the special Halloween pass for free.

With the number of items that were on some sort of time limit increasing alongside new players joining the game who missed out, Rockstar has decided to bring back some of these old exclusives and put them in Red Dead Online permanently. Examples include the Haraway outfit and Rebellion Poncho now available from Madam Nazar and the Fast Travel from Wilderness Camp Pamphlet from the Fence.

Some additional features have been introduced with Blood Money not necessarily tied to the Bronte mob – all Free Roam Missions can be accessed from a convenient Free Roam Mission menu anywhere you are in the world, and Rockstar is starting to roll out a new Daily Challenge system that rewards dedicated play.

All players who speak to Martelli this week can pick up the Hired Gun Kit from the Fence, a care package including a Fiery Bandana and some consumable supplies, alongside a few Capitale bonds to set you on the right track.

Blood Money also brings technical improvements to Red Dead Online. PC players can now experience the benefits of NVIDIA DLSS technology, which not only offers an even more stunning visual experience, but a smoother and more stable one too – reports indicate that DLSS can yield up to 45% better performance in the game.

Even though a DLC was released, there’s still an event week to be had as usual – naturally, themed after Blood Money. All players who collect enough Capitale to jump into the first Opportunities mission should do so, as you stand to get an extra Reward for any Bandolier. If you like a challenge and manage to complete the mission on Ruthless difficulty, you’ll also unlock the Pacific Union cap for purchase from Madam Nazar.

All bars and saloons across the west are hosting an open tap week, and all players logging into Red Dead Online can claim a Reward for one free Accessory of their choosing. Meanwhile, Ponchos, Camp Dogs, Camp Themes and clothing items at Gus’ Store are 40%, and the Bounty Wagon, Navy Revolver and Varmint Rifle are discounted by 30%.