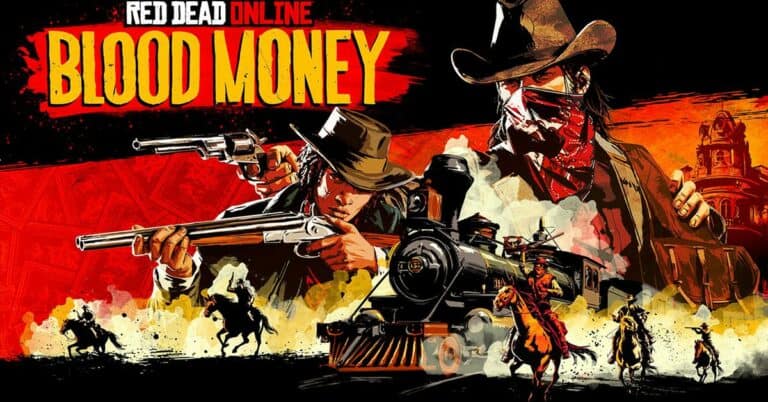 Red Dead Online is getting its own take on heists in the newest upcoming DLC for the multiplayer wild west romp, Blood Money. Joining this major summer update that Rockstar has been teasing for a while now is the Quick Draw Club, a new take on seasonal rewards with a shorter runtime and better rewards than seen in the Outlaw Pass.

Blood Money is launching on July 13, which is next Tuesday, so players don’t need to wait too long to delve right into a new world of organized crime with their virtual outlaw friends. In order to ramp up the hype and give us a good idea of what to expect, Rockstar has released a trailer setting up some of the characters and activities around which the DLC will revolve.

Taking a page from the extremely successful book of GTA Online, this latest update will focus on a set of daring, multi-mission robberies not unlike the heists of Rockstar’s other multiplayer experience. You’ll be set on this new path of crime by none other than Guido Martelli, right hand man of Angelo Bronte with whom we’ve gotten plenty familiar in the story mode.

Martelli is looking for daring gunslingers to pull off some particularly daring capers. You’ll need to rob trains and mansions, you’ll need to steal rubies, diamonds, emeralds and Capitale bonds. You might be tempted to ride off with the loot yourself, but getting on Martelli’s bad side isn’t good for the health.

The best part of the arrangement is that you don’t need to buy in – if you have the skills and a trusty gun in your holster, you’re all set to join up with Martelli. Bronte and his underboss will clue in trustworthy and loyal outlaws to even greater earning opportunities once you prove your worth.

In your quest to recover Capitale, you’ll need to hit up all the various seedy contacts in Martelli’s network who have leads on the most daring capers the west has ever seen. This new brand of in-game activity will simply be known as Crime, and can involve anything ranging from easier solo assignments to challenging robberies with multiple stages and setups you’ll need some friends for.

When you embark on a Crime mission, the inherent reward for completing it isn’t your only source of Capitale. If you keep an eye out, you might find extra bonds in various chests and hidden stashes, and optional objectives will let you increase your yield even further. As you bring back more and more bonds to Martelli and gain his trust, he will begin to offer Opportunities missions.

These Opportunities are tied into the on-going storyline about Martelli’s attempts to undermine the anti-crime efforts of an up and coming Lemoyne senator. As you bring back Capitale to the underboss, more and more Opportunities will be unlocked. Blood Money will add the first three Opportunities missions to the game on the 13th of July with more on the way.

Gameplay content isn’t the only addition to Red Dead Online with Blood Money. PC players with sufficiently beefy rigs running RTX graphics cards will be able to benefit from NVIDIA DLSS for an even smoother and more beautiful experience.

Blood Money also heralds the beginning of a new era in seasonal content. Red Dead Online players can say goodbye to the Outlaw Pass and welcome the Quick Draw Club, which in broad strokes is a similar system, albeit scaled for faster completion. The Quick Draw Club reward tracks last a lot shorter than those of the Outlaw Pass, but progression will be equally quicker.

The first pass will launch on the 13th, lasting until August 9th, with three others already mapped out for the upcoming months. Purchasing the pass will cost you 25 Gold Bars, however by completing the reward track you’ll earn all of those 25 bars back alongside additional rewards, so we’d definitely say it is worth it as long as you put in the work.

Among the rewards of the Quick Draw Club Pass No.1 is Dutch’s Redcliff Outfi, the Whitchurch Cattleman Revolver Variant, the Rushword Shirt and the Fircroft Hat among others. The currently announced 4 passes cover this year all the way to the end of October, and if you buy into all of them you will get free access to the Halloween Pass 2 coming later this year.

Items that were previously exclusive in some shape or form are making a return, in some case permanently. Skill and Satchel Pamphlets were previously restricted to Outlaw Pass progression, but as of Blood Money’s launch they’ll be available from the fence any time. Similarly, a bunch of Outlaw Pass exclusive outfits have been added to the weekly limited time clothing item rotation, giving newer players another chance at buying them.

Blood Money is shaping up to be the meaty DLC Red Dead Online players have been waiting for. It is no secret that many fans were dissatisfied with the amount of content in the game, and this is undoubtedly Rockstar’s answer to those complaints. Hopefully Blood Money will reinject Red Dead Online with enough energy to truly become revitalized – and a rival of GTA Online.