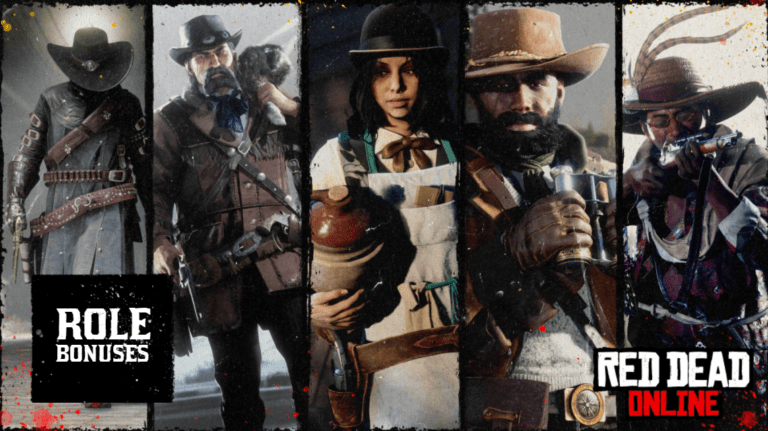 Red Dead Online Role Bonuses Across The Board This Week

Role bonuses seem to be the name of the game as far as weekly events in Red Dead Online are concerned, but we don’t usually get the kind of smorgasbord of opportunities we’re getting this week – through the 22nd of June, every Role in the game has some kind of extra payout or other promotion to exploit.

Many bonuses are shared across all Roles, so no matter which profession turned out to be your calling or whether you are a jack of all trades, you’ll be eligible for these goodies. We’re looking at a bonus 2,000 Character XP and an Offer for 30% off any Established or Distinguished Role Item if you climb 5 Role Ranks anytime this week, in any Role.

There are some offers tied to certain prerequisites as well. Those of you who are relatively new in your chosen Roles and have yet to reach Rank 10 will get an Offer good for 30% off a Novice or Promising Role Item, while true veterans of the frontier who have passed Rank 20 in all five currently available Roles will get an Offer for 50% off an Established or Distinguished Role Item and 5,000 Character XP.

All Free Roam Events that are related to one Role or another will be dishing out double the usual rewards all week long, and Traders and Moonshiners can bag 2x Role XP on their Sell Missions. The former will also get 2 Rewards for 25 Goods each, while the latter will get 5 free Mash refills. Moonshine Shacks can also be moved at no cost.

Discounts this week are appropriately Role themed as well, helping new professionals establish themselves in the biz. Trader Wagons, Work Horses, the Wilderness Camp and Tonic Crafting Pamphlets are discounted by 40%, and you can also pick up Pants, Skirts and Boots of all varieties at a 30% discount.

Stay tuned for news about the upcoming summer DLC!

The post Red Dead Online Role Bonuses Across The Board This Week appeared first on RDR2.org.